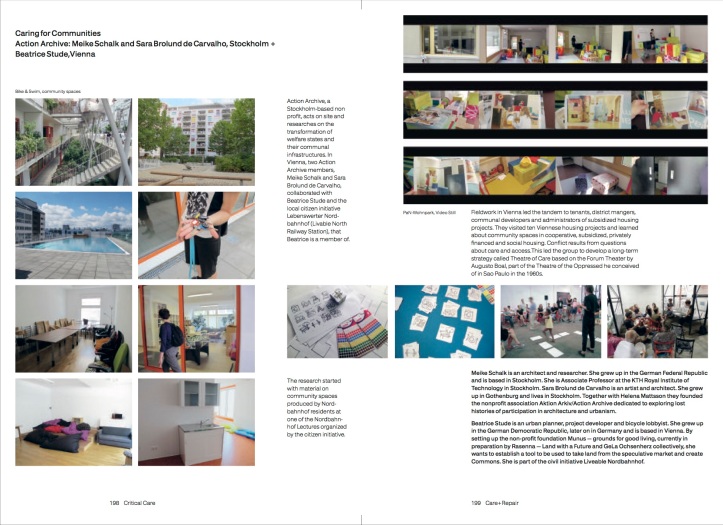 At the exhibition Action Archive presented a summary of the field work under the name Care+ Repair Prototype: Caring for Communities. The work deals with common spaces, parctices of care and repair as well as experimenting with models for negotiating conflicts concerning common spaces.

More information about the project here.

In the project “Caring for Communities: Action Archive in Vienna”, for the workshop and group show Care + Repair, a public workspace of the Architekturzentrum Wien in the framework of the Vienna Biennale 2017, at the Nordbahn-Halle in Vienna, Action Archive from Stockholm and the Vienna-based urban planner Beatrice Stude worked in tandem together and with the citizen initiative “Lebenswerter Nordbahnhof” (Livable Northern Train Station) where Beatrice is also engaged in.

We started out with a field study of Common Spaces / Gemeinschaftsräume in the area of the Nordbahnhof based on material the citizen initiative had produced in one of their self-organized “Nordbahnhof Lectures” series prior to the project. Nordbahnhof is currently one of the largest urban development zones of Vienna. During two weeks of fieldwork in July 2017 which included site visits and interviews with tenants, district managers (Gebietsbetreuung) and communal developers and administrators of subsidized housing projects, we visited 10 housing projects with their Common Spaces in the area. Residents granted us access and guided us through their Common Spaces. We have learned about housing projects of various legal forms and subsidization in relation to tenants’ experiences of getting involved in the creation of Common Spaces, their occupation and maintenance.

About the exhibition ‘Critical Care’:

The exhibition ‘Critical Care’ shows how architecture and urbanism can contribute to repairing the future and keeping the planet and its inhabitants alive.

The exhibition ‘Critical Care’ is an appeal for a new approach, for a caring architecture and urbanism. 21 current examples from Asia, Africa, Europe, the Caribbean, the USA and Latin America prove that architecture and urban development do not have to be subservient to the dictates of capital and the exploitation of resources and labour.